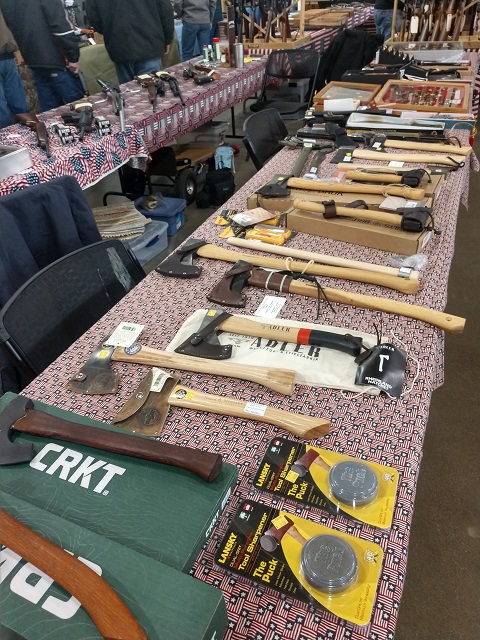 Had an email the other day asking if I had died or just in a catatonic winter doldrums stupor. Well, I’m not dead so I guess you can draw your own conclusion. So what’s the latest news from the Northland. Let’s start with the Fergus Falls, MN Gun Show from a couple weeks ago.

This is part of what I put out for display. It was the first showing of the line of axes and hatchets from the Trestle Pine Knives store. This was a surprise to a lot of my ‘old’ regulars that don’t use the internet but regularly attend the shows. The response was interesting and encouraging.

Everyone was interested to see a dealer show up with something other then the ‘usual’ items. I sold a number of knives, a couple of hatchets and a lot of odds and ends. I’m really anxious for the April Gun Show in Detroit Lakes. What I’ve found happens is people will show up at a show, they’ll see something they weren’t anticipating and the next show they’re more interested in buying.

At every show there’s always a ‘deal’ or two that sticks with you. This show I had a young (11-12 yr old) young man come through with his dad. When he saw the hatchets he froze and turned to his dad with a grin on his face about a mile wide. There was a brief father/son discussion and he quickly narrowed his choices down to two hatchets. After checking his wallet and a bit of a price adjustment on my part, a deal was struck. It is so much fun to see that happen.

On a more humorous note, an older gentleman came through and asked if I bought ‘collections’. My eyes lit up and as calmly as possible I told him sure, if it was nice stuff I might be interested.

About two hours later he showed up at the table with a nice canvas bag. I’ve got my hopes on a bag of early Randall’s or maybe some mint condition Loveless knives. The anticipation and tension was thick! Now he’s got me believing he has some really nice stuff. The he laid out 8 or 9 of the gaudiest Chinese pieces of…..crap, you can imagine.

As gently as possible I ‘explained’ that I really wasn’t interested in any of them. When he told me he had hoped to get around $175 for the ‘collection’ I politely told him ‘ain’t gonna happen. No way, no how‘. After a little more discussion I flat out told him they were worth MAYBE—MAYBE $50 total. Now I’m being generous in my estimate and anticipated a rude comment in return. Nope. He took that as an offer and said, ya, he’d take that.

I’m stuck. As a man of my word I realized I’d made the comment to sound like an offer. Soooo, I reached in my wallet and gave him $50. Now my nephew is with me and he’s doing everything he can to keep from bursting out laughing during this exchange, because he knows I did NOT want those knives at any price.

We had a good laugh and I threw a few of the ‘gems’ on the table without price tags. Within an hour I’d turned just shy of $120 and still came home with 2 of them. I’m not going to change my approach and start buying more inventory like this. But it makes you wonder if there isn’t a customer profile you’re overlooking.

It was a fun show overall. The internet is great but that face to face interaction just can’t be beat! And I’m still looking for QUALITY collections to buy, ……just be advised….