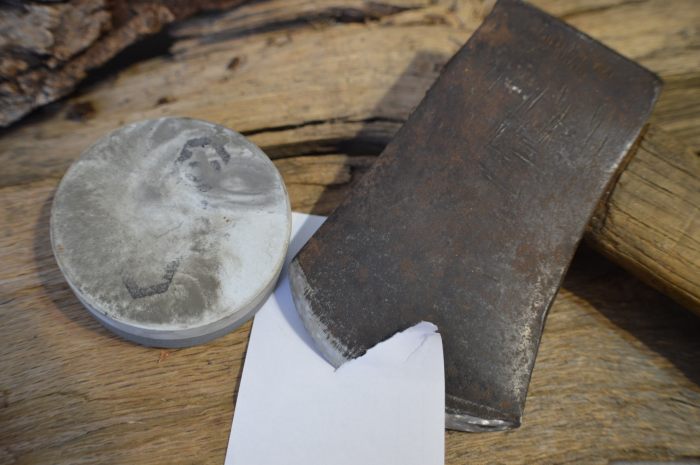 Back in the 1950’s I had a relative working for one of the major lumber companies in the Northwestern US. At some point in time, he gifted my dad with what he referred to as a ‘boys ax’. It measures just 25″ and weighs a grand total of 3#’s. I like axes and hatchets and this one is a gem.

For the next 30-40 years, was put into service on our farm performing all sorts of typical and non-typical tasks. It sharpened garden stakes to hold up our pole beans and tomato plants. Split the kindling for the cook stove. Dispatched chickens for our Sunday dinners. And unfortunately, occasionally used as a hammer to drive in a wedge for splitting stumps. It was and remains a tool.

The head of the ax is stamped “Sager Chemical Ax 1946”. It was made by Sager but the name is getting hard to read.

Amazingly, it still has the original handle which is still in great shape!
Considering what all it’s done in the last 70+ years, that’s hard to believe.

Somewhere along the line it ended up in my possession. When that happened it ended up a part of our camping gear and was put to good use on many a trip. I can’t imagine how many tent stakes it’s pounded in or how much kindling and firewood it’s split over the years. As you can see, the blade probably hasn’t seen a stone or a file in many a year. In fact, I don’t recall touching it up in recent history. The blade’s, not too bad but it’s definitely not what I’d call sharp. All in all it’s just a great little ax that’s been neglected.

I decided to start out with a flat file and take off the nicks and burrs. This wasn’t the type of project that was going to be done with nothing but a stone! I considered using the 1″ sanding belt but decided to go the file and stone route. It worked great to put the head in a vice that I could rotate so I could work over both sides of the blade evenly.

After about 15-20 minutes of judicious file work, I got on it with a Medium / Fine combination stone from Arctic Fox. I’d guess I spent another 10-15 minutes trying to make sure I’d removed any burrs left from the filing. The Arctic Fox Stone is a wet stone and it worked great. It fits in your hand and just using a circular motion on the blade is all it takes.

The final result was more then satisfying. The edge came back in what I feel was a reasonable amount of time with minimal effort. Going forward, I’m planning on trying to use the stone to touch it up from time to time.

I’m not saying this is hair shaving sharp, but it’s going to make a world of difference in the field. When it was all said and done, I’ll admit I feel a bit guilty for not taking better care of this great little ax. It’s served my dad and I well for decades and has decades more use in it.

Unfortunately, too often an ax is one of those tools that just gets taken for granted. We don’t use it like a knife. We don’t really care if it’s razor sharp. We’ve all ‘chewed’ off a branch with an ax or hatchet that’s duller then me on a Saturday nite. It doesn’t have to be that way and it sure makes the cutting, chopping and splitting jobs a whole lot easier.