The weekly update is best summed up in one word.  COLD!  I’ll share a few pics below of how we celebrate the cold up here but business first.

The GEC 56’s two blade models have been coming through with regularity and have been well received.  As usual, the interest in the single blade version that’s coming seems to be drawing the most interest.

The 56 is a great knife but personally, I’ve always preferred a Wharncliffe, Drop Point, Sheepsfoot or Clip (in that order) for a day to day knife.  In fact, I’d like to see more Drop Points from GEC to lure me back into the fold.

Once the single blades are finished up in another week or so, I’m looking forward to the new #43.  I’m not sure if GEC will squeeze the 71 Bull Nose in front of the 43’s but that should be a pretty short run in any case.

I added a few more of the Blackjack Knives to the storefront and am getting some feedback from customers.  What I’m hearing is tracking pretty close to what I’ve felt.  It’s a great knife for the price.  I’ve played around with one a little but haven’t taken it outdoors to really put it through it’s paces.  I’m particularly happy with the way that blade quickly thins to a narrower cutting edge from about the midpoint on towards the tip.  What you might sacrifice in strength is more then made up for in utility. 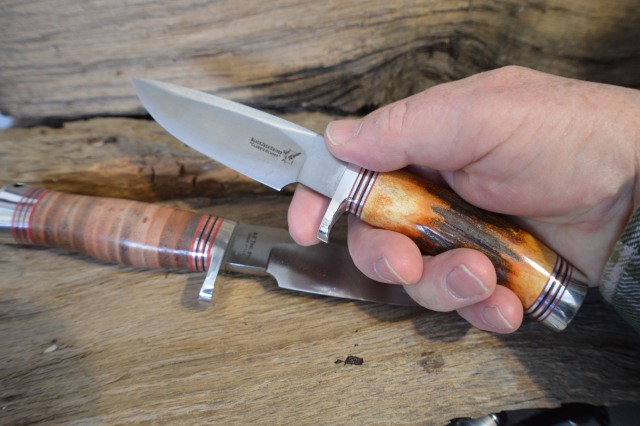 I was showing a friend the stag handled 124 (above) and she immediately grabbed it with her index finger in the ricasso and thumb on top of the blade.  Her first comment was how comfortable it felt.  Have to agree!

No news regarding Queen this week.  It seems that everything is still on hold and we all continue to wait to see what happens.

Now, regarding the cold weather….  I’ve been taking some pictures as our Ice Castle has been being built and last nite was the official lighting.  The Ice Castle is the center point of our annual winter Polar Fest.

The Polar Fest is an annual event that lasts for about a week in an attempt to distract us all from the miseries of a north country winter and to stall off the effects of cabin fever.  We’ve had sub-zero overnite temps since Christmas nearly every nite so we’re ready for a distraction.

Harvesting ice from Detroit Lake was the 2nd largest industry in our town.  The last commercial harvest was in the 1970’s.  Starting in the lat 1800’s, two competing ice companies harvested and sold ice to businesses from the midwest to the west coast and Texas with the Northern Pacific Railroad being the largest consumer.  At the peak, they harvested up to 200,000 pounds of ice employing as many as 180 men during the peak harvest.  There are some interesting video’s showing how the ice was harvested this winter and more info at this link if you’re interested:  Ice Harvest on Detroit Lakes

Here are a few pictures I’ve taken over the past few weeks chronicling the harvest and construction of the Ice Castle. 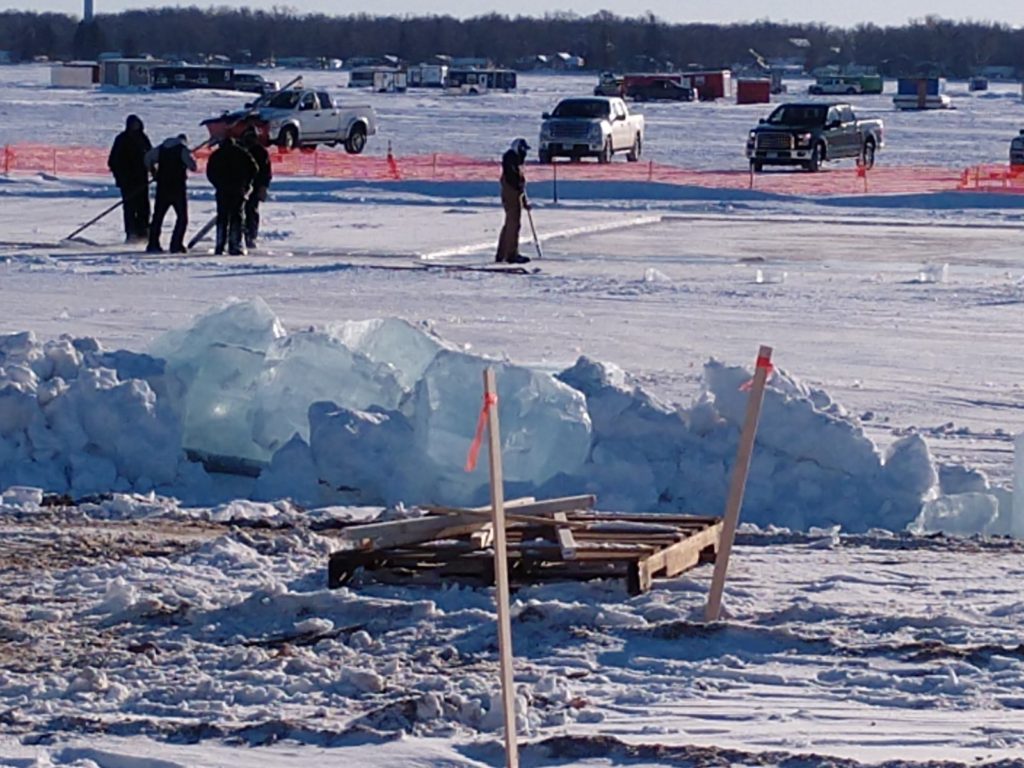 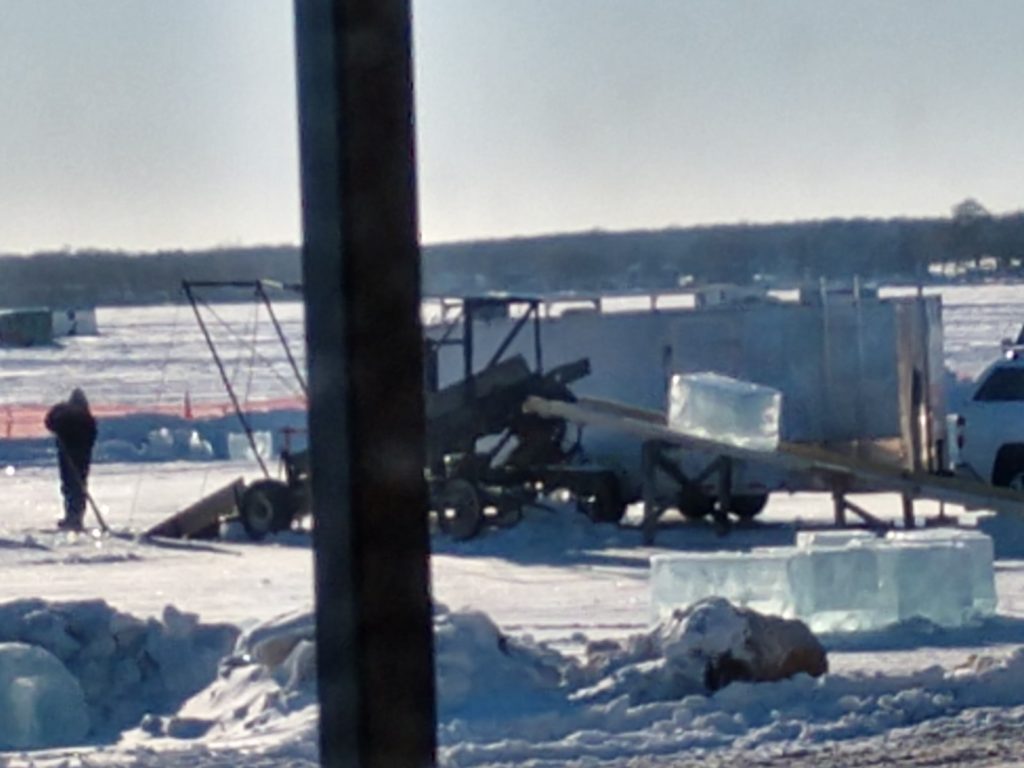 The blocks were lifted into place and fitted by hand 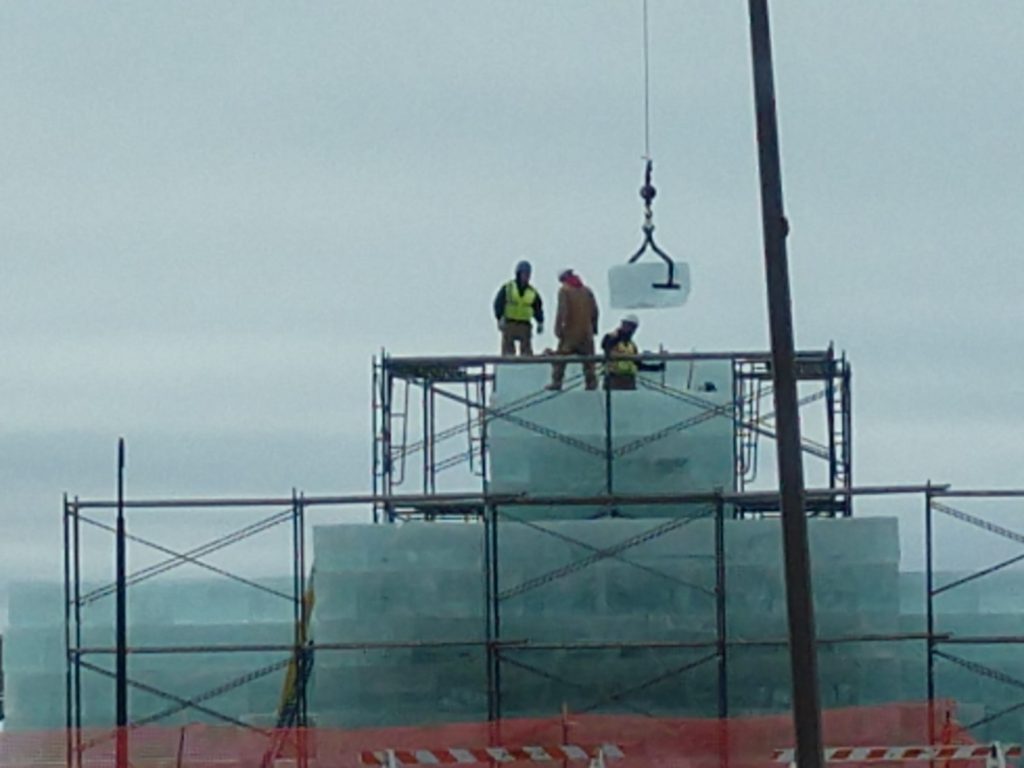 After several weeks, the structure is finished with parapets in place 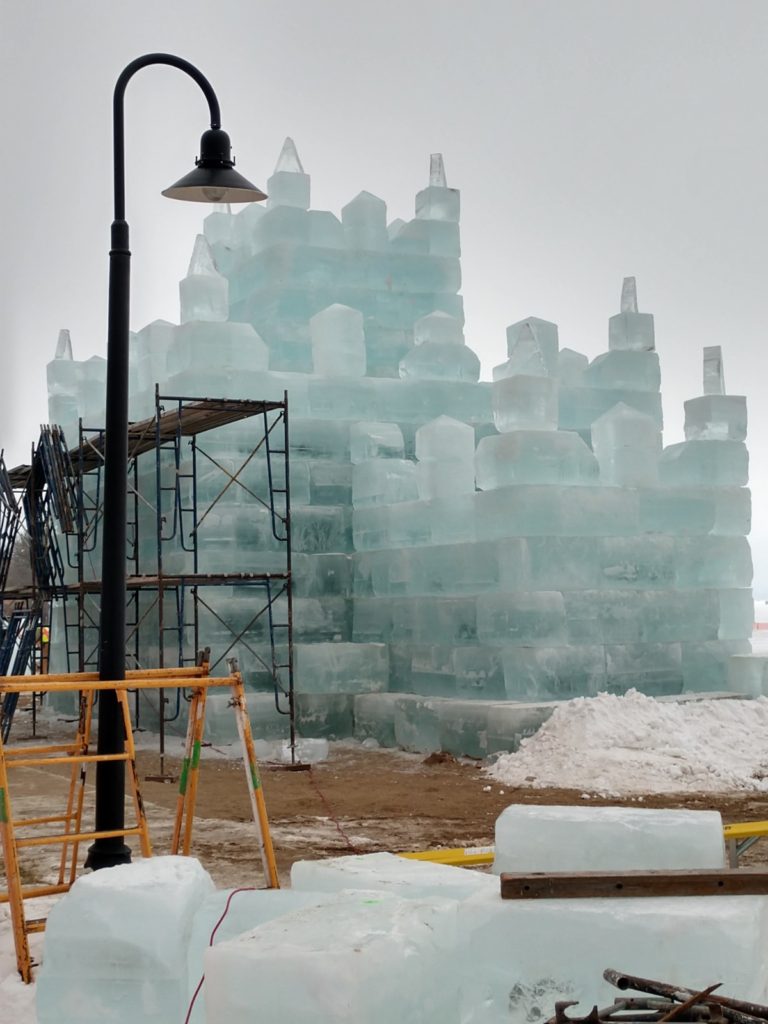 Flags are put in place with the names of the sponsors responsible for making this happen. 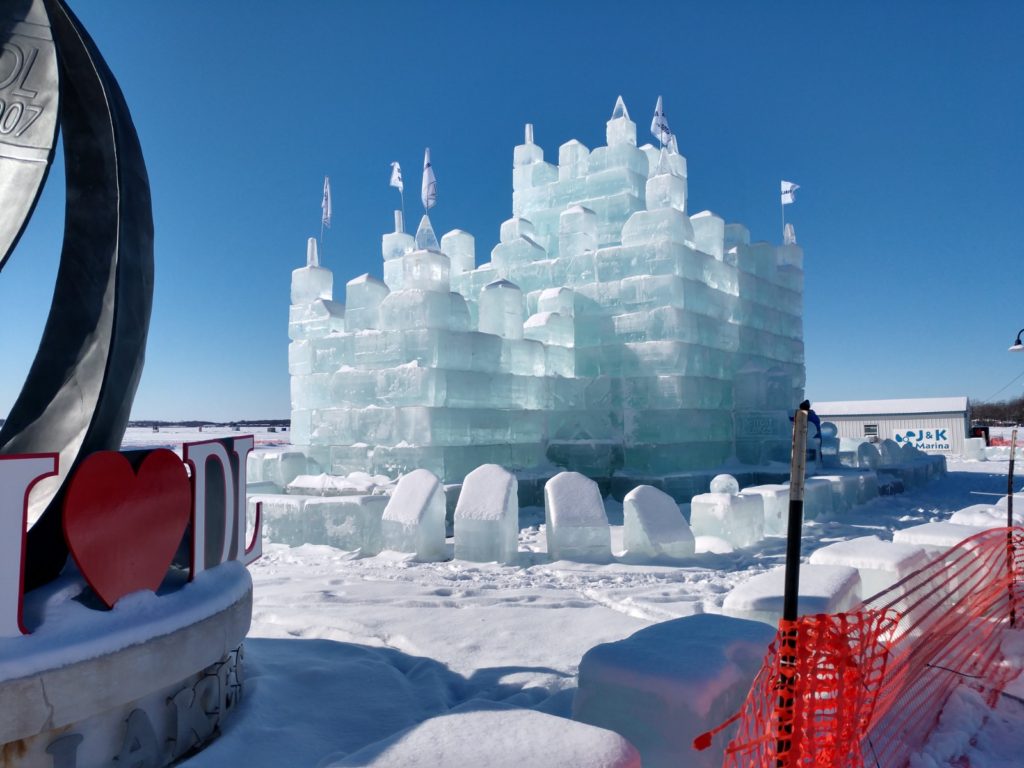 Last nite, February 8th, 2018 was the official lighting of the castle kicking off the Polar Fest 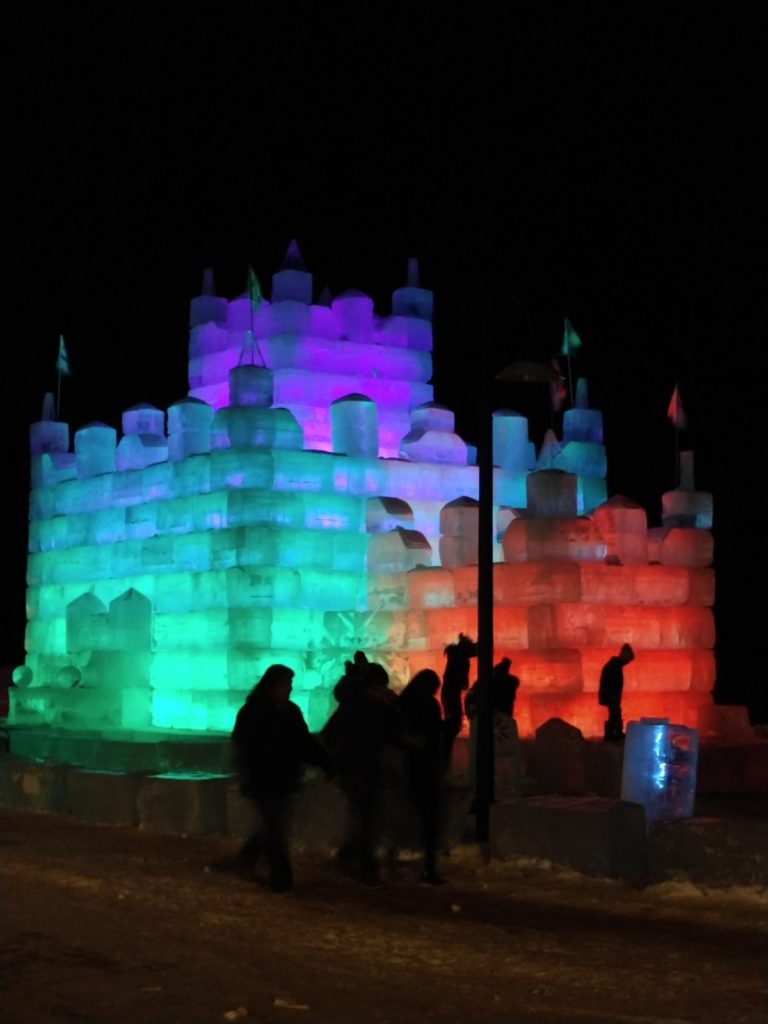 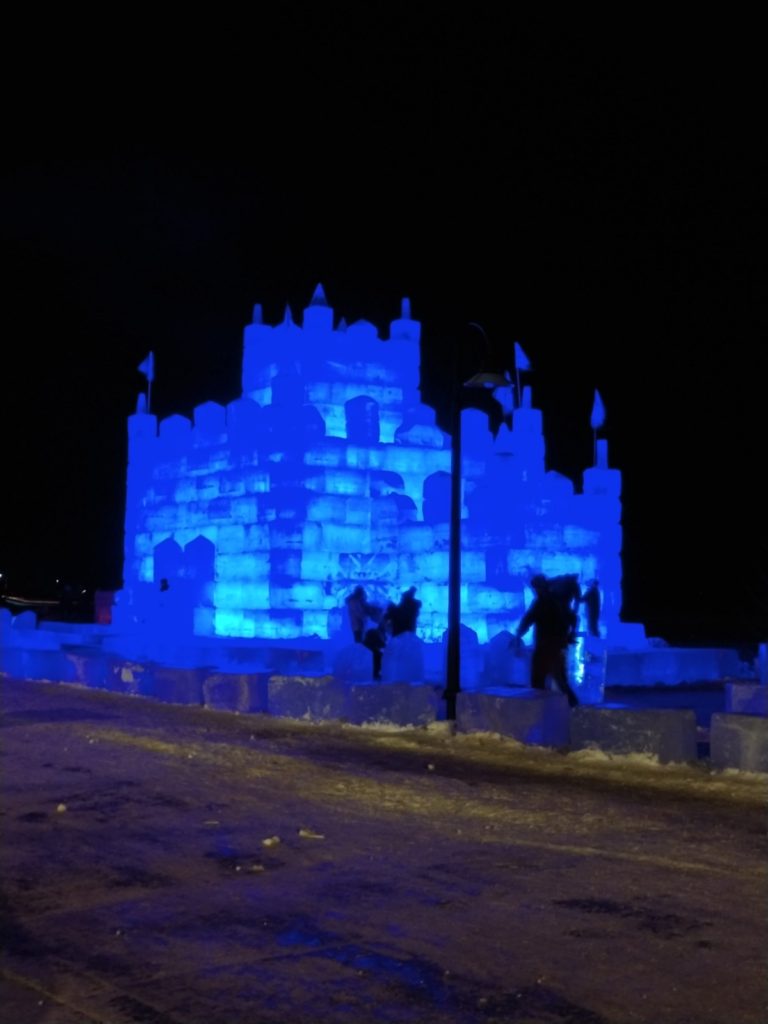 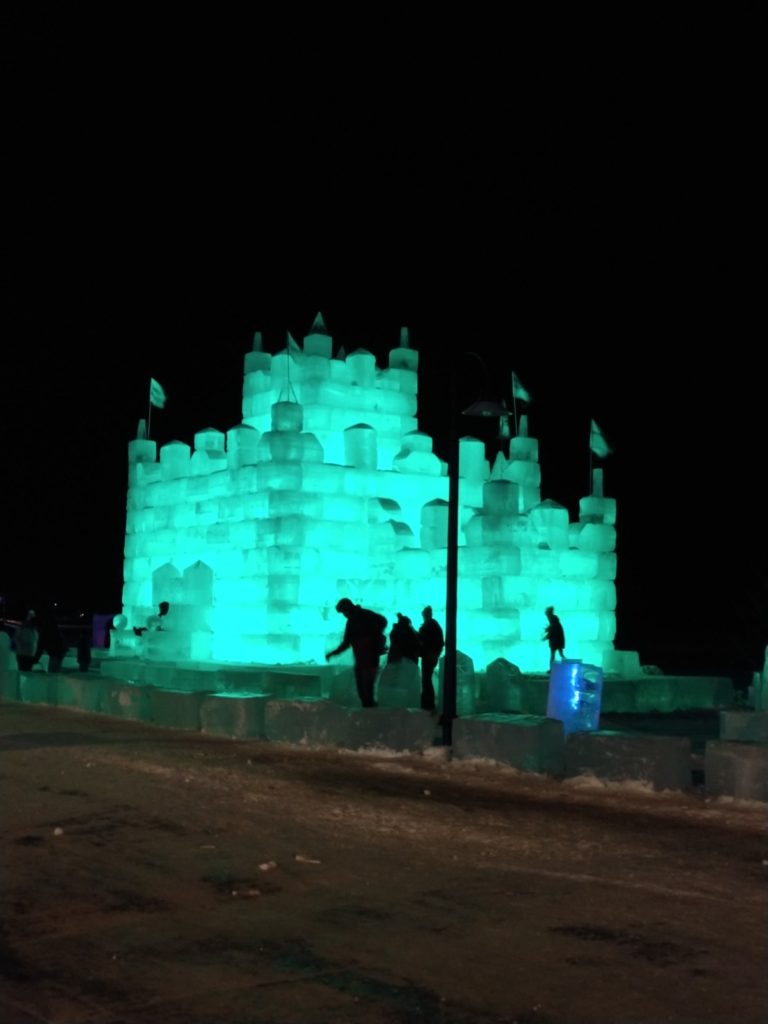 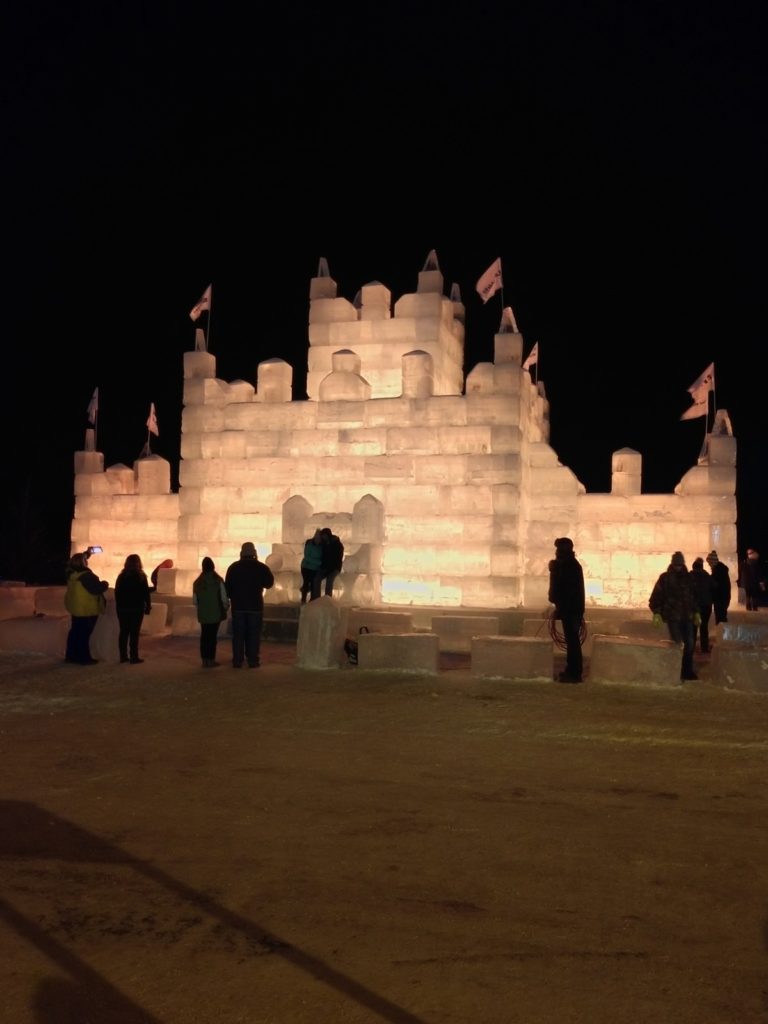 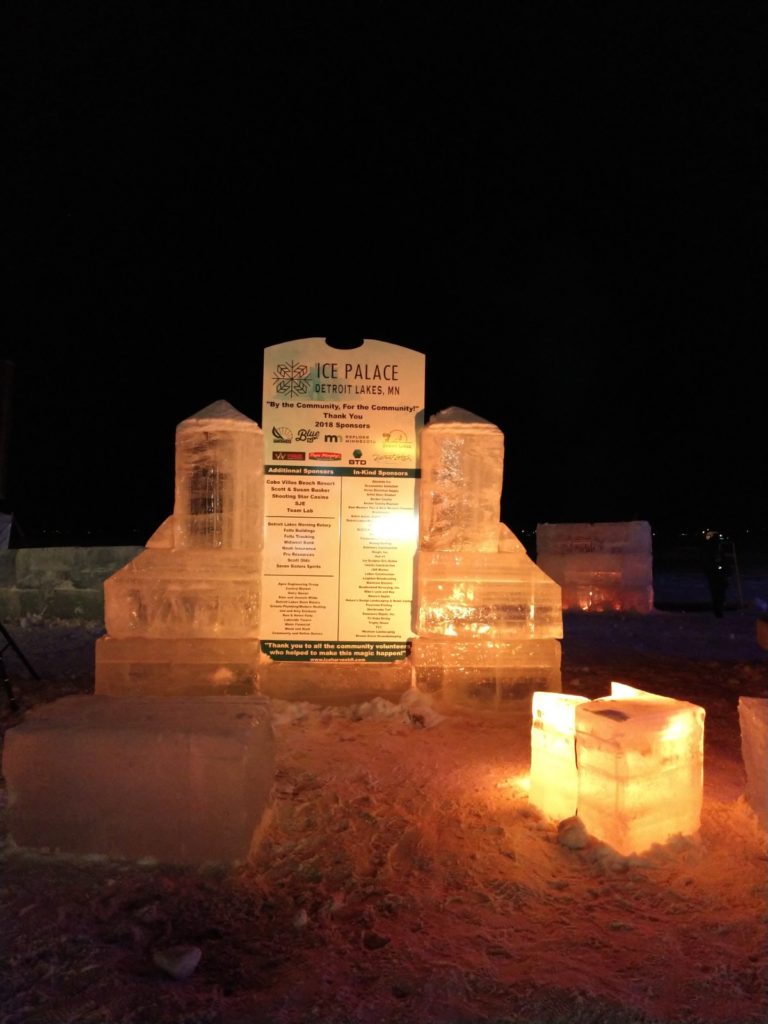 Just to give you a better appreciation of this event, I took the color pix last nite around 7:45PM with an outside temp of -2F finishing up at -21F this morning.  We arrived late but evidently there was  a large crowd present earlier to kick things off.   All kinds of events occur during the next 10 days with a fireworks display set for February 19.  Then….we’re ready for spring!