Had to share a photo sent to me from Canada this past week that really belongs in the weekly update.  As a fellow fisherman, I reealllly enjoyed this photo, (and not necessarily because of the knife in the photo!).  Thanks Ron!!! 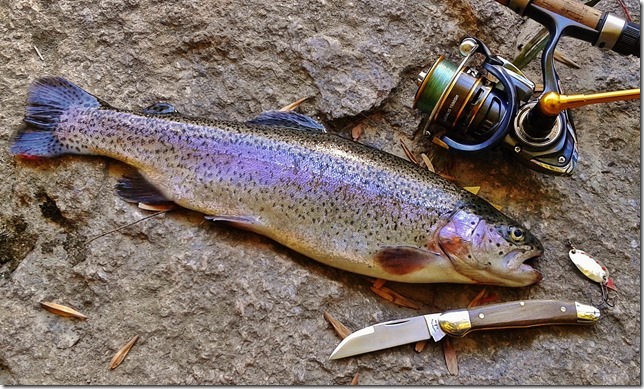 Had a conversation with a Hess Knife customer yesterday about sharpening.    Specifically, we chatted about putting a convex grind on the blade(s) of a couple of his hunting knives.  He had read the article on the TSA Blog that I posted back in August of 2012 and decided he wanted to try it out.  Convex Grinds.    He was familiar with the convex grind on the Bark River and Hess’ and really liked the fact they held an edge well under heavy use.  I gave him a couple of tips and suggestions and he was ready to go.  It was nice to talk to someone who wasn’t afraid to experiment.

It reminded me of an interaction I had with a young guy at the recent gun show.  This particular teenager has been coming to  shows with his dad for years and started hanging around my tables 4 or 5 years ago learning how to tie paracord bracelets, trading knives, etc.  At an earlier show he watched me use the Edge Pro to sharpen some customer knives and was duly impressed.  This time he showed up with a knife, a well used Lansky sharpener and asked me if I’d sharpen his knife.

After we talked for a while, it became obvious he really didn’t know how to use it properly.  He had the basics, but the stones were loaded with metal and dry as a bone.  We cleaned up the stones and put some honing oil on them.  We talked about how to determine the existing bevel on the blade using a magic marker with the Lansky, using coarser grits to get started and switching to finer stones as the edge starts taking shape.  With a little guidance, he made a few strokes on the blade and you could see him silently saying….I get it!!!  I sent him on his way and back he came a 1/2 hour later with a grin on his face.  The knife had a really decent edge on it.

Working and talking to these two fellas reminded me how important it is to share information and show interested people how to do things.  One of the highlights of my summer was helping my 13 year old friend make his first knife.  It’s so much fun to watch that look of puzzlement turn into a grin of understanding and personal achievement.  One of the nice things about the knife community is it always seems like there’s somebody out there willing to lend a hand and an encouraging word.  Right off the top of my head names like Donnie, Dave, Ken, Bob, Mike all come to mind.  Thanks guys!