It’s been a great week.  The weather has been cool but we’re heading into the 80’s for the weekend which is fantastic for this part of the world!!  Leaves are turning and starting to fall and we’re loving it!!!!!

Really appreciate the positive feedback I’ve been getting on the Superior.  I have been using and carrying one for the past week and am happy with the overall feel of the knife and edge retention.  The 154CM has a great rep’ for holding an edge and so far, the Wharncliffe on the Superior has been everything I’d hoped for.

A couple of customers have commented that the knife is comfortable to carry but when the blade is deployed, it feels like a much more substantial knife then it feels with the blade closed.  In my limited experience, I’ve always thought the Wharncliffe and Sheepsfoot blades have a way of conveying the feeling of holding a larger knife when opened.  I think it’s particular noticeable when you handle some of the smaller Barlows.

Wish so bad I could make another fast trip to the Arrowhead but it’s just not in the cards.  However, I wanted to share a few pix of the last trip.  I posted some pictures going back into Trestle Pine, but I didn’t get a chance to show you a few sights we saw on the way.

I did find a boat I really liked, but we had a problem with the hitch on the Jeep.  Turns out I had the wrong size ball on the hitch to pull it home.   Maybe next year.

Just as we turned the corner to go down the Trestle Pine Road, we met a timber wolf coming up the road at us.   By the time I got the camera out, he’d turned tail and headed down the road away from us.  About three seconds later, he faded into the woods like a ghost. 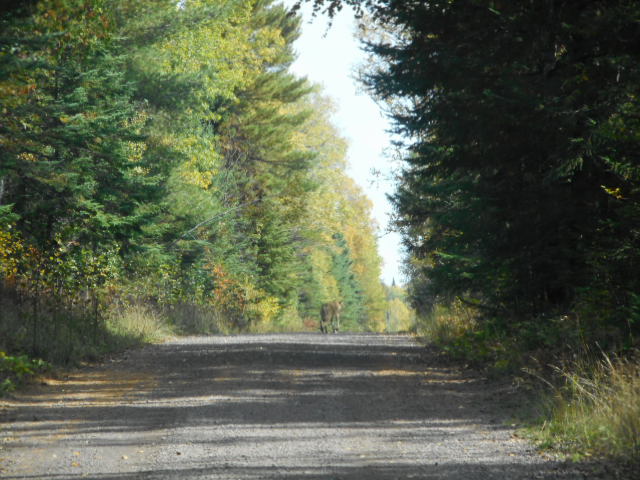 You get to see the occasional coyote up there and while the timber wolf population is up, seeing one has always been pretty unusual.  I had an interesting visit with a local that had a closeup encounter with a timber wolf while hiking one of the trails earlier this summer.  The fellow had a small dog on a leash and the wolf hung around long enough to make it clear the dog looked like a potential snack.

The real treat came when we got to see a moose.  Actually, we got to see 4 moose.  These were the first moose we’ve seen in the last 5 years.  Our moose population is way down in the NE part of the state and to see 4 on one trip…..unusual.

We had a pair of cows cross the road in front of us.  I stopped, got out and took a couple of pictures from a distance.  I have a lot more fear of moose in the wild than black bears and respect their personal space.

I was almost back to the Jeep when my wife told me there was another one coming out behind the cows.  By the time I turned around, a decent sized bull was on the road looking at me.  I managed to get a couple of pictures before he headed into the woods following the pair of cows.  It’s amazing how an animal that big can just disappear in the woods in a matter of seconds.

About 20 miles down the road we had a second, smaller bull cross the road in front of us.  It’s mating season and they are definitely on the move   The moose were the highlight bracketed between sightings of the wolf, ruffed grouse and deer. Just an amazing morning cruising the back roads.

Getting to see all the wildlife and getting some pretty marginal pictures prompted me to order a new camera when we got home.  I’ve been working with one of the sub $100 point and shoot camera’s with fair results.  The camera on my phone is much better, but I don’t carry that with me unless I feel it’s absolutely necessary to my survival!!!  So I guess it was about time to take it up a notch.

The last nite we were in town, the sunset was incredible.  The fog moved in over the lake and the setting sun made it look like you were seeing the clouds actually laying below you. Perfect ending to a perfect weekend. 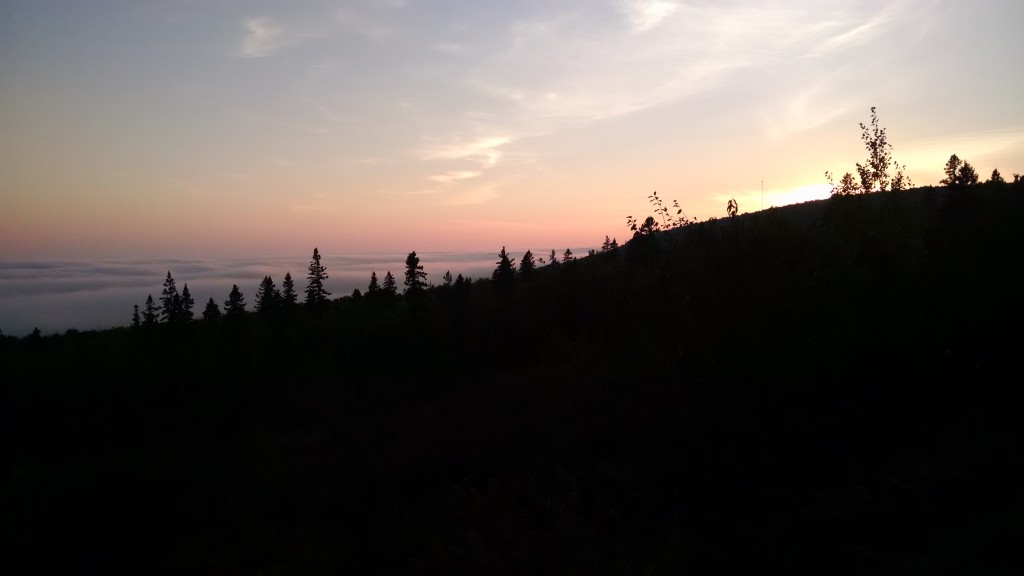