Last weekend we made our annual trip to the Grand Marais, MN area.  Weather was gorgeous, the leaves were stunning and the wildlife cooperated!  (more on that in another post)  Part of the trip included driving back to the place that played a key role in the development of the Trestle Pine Knives concept.

Just up the road from Grand Marais is Trestle Pine Lake.  Going back 40 years this is one of the first ‘remote’ lakes we fished.  I haven’t dug out any old pictures yet, but when we first started going in, the road was nothing more then a trail that followed an old railroad right of way through the woods that was abandoned many, many years ago. Narrow and full of ruts, at that time it was definitely a 4×4 only proposition.

The low spots in the grade were corduroy which was simply a series of logs laid across those low, swampy areas to give you a solid surface to drive over when it was wet.  It used to be interesting on the rare occasion you’d meet another vehicle and a decision had to be made who would back up to let the other one pass.  Today, it’s damned near a highway.  Well, a decent single lane road, for sure.  Graveled and occasionally graded making it a lot less interesting a trip then it used to be.

The lake itself isn’t overly large and 40 years ago, there wasn’t a cabin on the lake. Today, there are a couple of summer homes, but for the most part the lake is still a pristine northern Minnesota lake.  Just looking out over the lake conjures up the smell of fresh trout and fried potatoes over a campfire…..and memories of sore muscles from hours of paddling!

Straight out of a 1950’s  Hamm’s beer commercial,  From the Land of Sky Blue Waters!  Trestle Pine Lake.

I could fill pages with stories of fishing on this lake with my wife, nephews, nieces, friends, family and even a few people I barely knew.  One evening my wife and I were fishing in that far corner just as a mayfly hatch started.  We had trout rising and taking small spinners on nearly every cast….. anyway.  At the far end of the lake is a portage that will take you into another gem of a lake called Kemo.

Here is the famed ‘trestle’ for which the lake is named.  In fact, on most maps it’s referred to as Pine Lake, but locally, every knows it as Trestle Pine Lake.  Now you know why.

I have no idea when the train tracks were removed but it’s been a long time.  The old piles look the same today as they did 40 years ago when I first saw them.   What I do know is that it’s been many, many  decades since any logs were carried by rail car over this bridge.  I’d love to find an original photo from back in the day if any existed.  Doubtful.

A couple of people have asked where the name for the first Trestle Pine Knives release came from.  The Buddy.  It isn’t one of those cute names I just pulled out of thin air trying to appeal to the consumer.  As with this whole project, it has a special meaning to me. 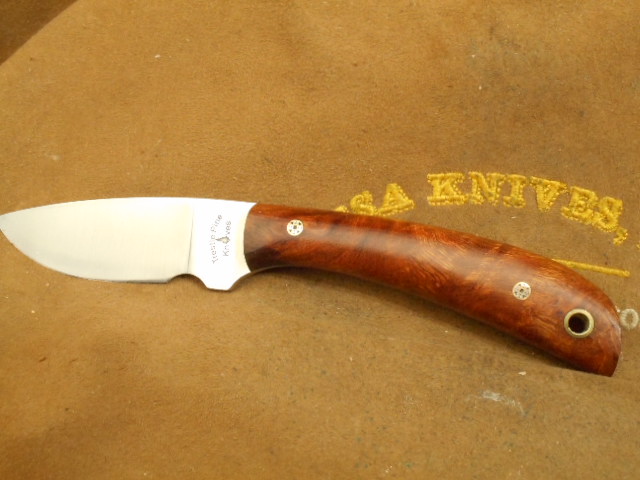 This is the original Bud(dy).  I got Bud (a well pedigreed AKC Brittany) back in the 80’s and spent many fabulous years hunting with this guy.  Natural pointer, self taught retriever and a lot smarter in the field than I ever hoped to be.  I’ve hunted over a few dogs and while I’m undeniably prejudiced, Bud was one of the smartest dogs I’ve hunted with and he taught me lot about dogs, life in general and myself in particular.  As the saying goes, he just didn’t have any ‘quit’ in him.  Cold, wet, freezing, no birds, didn’t matter.  He lived to hunt and was always the last one give it up on a birdless day.  And by the way, it’s not a Brittany Spaniel, it’s a Brittany….period.

When he was a pup, I worked with him on his pointing skills with a pheasant wing tied to a piece of fishing line that I drug around the ground until he learned how to hold solid on a point no matter how tempted he was to break.  While he could care less about retrieving a stick or a ball, he’d point that wing by the hour and ask for more.  When he discovered that fishing pole could be used for something other then dragging that inanimate wing around, things got really interesting for both of us.  A live fish on the end of the line was waaaay more interesting.  It got to the point he’d watch for any movement in the rod tip when you were fishing.  He knew when you had a bite and let you know by coming in tight against you and leaning on you.  As a result, whenever he saw the fishing pole come out he was just as excited as seeing the shotgun come out of the case.  If you notice, the screen is open but he’s staying close to the fishing gear. 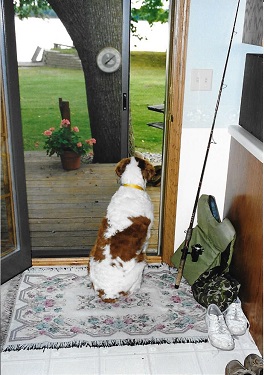 And while some pointers don’t like water, Bud loved it which made canoe trips into the North country trout fishing an interesting experience.  Fishing from shore was always a competition to see who got to retrieve the fish.  In the canoe, that sometimes became a more of a battle then a competition.  After all the hours we spent together in that canoe, he never seemed to understand it would tip over if you leaned too far over the edge.  We never capsized so maybe he knew what he was doing or just trusted me to keep things on an even keel.  He never chewed the fish up, he just took an immense pride in helping out.

If you’ve ever had the good fortune to hunt over a good pointer, you know it’s almost poetry in motion.  The shooting becomes secondary to watching the dog work.  Watching them first catch the scent of a bird and starting to pinpoint their location.  As they start closing in you can see them shut out everything around them putting 100% of their focus on the task at hand.  And finally, all movement stops and they freeze, barely breathing.  As I’d move up alongside to take the shot, Bud would glance at me without moving his head, almost trying to point the birds location by just moving his eyes between me and the bird.  You got this telepathic message…‘over there, right over there.  And for crying out loud, don’t miss this one!’

This was back on Trestle Pine Road when he was in his prime.  Grouse and Trout all in the same day, it doesn’t get any better then that for man or dog.

And when night came in camp, he knew where he wanted to be.  Off the ground and out from under foot.  If he couldn’t be near the fire, how about a blanket.  Ever slept in a tent with a wet dog curled up in a ball, tight against you?  As often as I complained about it, its hard to believe, but I’d give an awful lot to have that tired, wet, smelly dog curled up next to  me one more time after a day of fishing and hunting together.  Sometimes, if I close my eyes reeeal tight, I can almost…..

Bud and I spent 24/7 together.  I worked from home and for twelve wonderful years we enjoyed hunting, fishing, hiking and camping in the north woods together.  It was rare indeed I went up without him.  So it just seemed appropriate that the first Trestle Pine Knives release should be in memory of a true Buddy that enjoyed that country every bit as much as I still do.  Trestle Pine Lake and a Brittany named Bud.  Believe me, it doesn’t get any better then that.